AMU-LED’s Concept of Operations (ConOps) targets a transitional mid-term (2025-2030), when the first piloted air-taxis will start operating in cities within U-space airspaces with most U1-U2 services deployed.

AMU-LED assumes that current U-space responsibilities and services will have to be extended to cope with the particularities of the missions and business cases that are specific to UAM such as air-taxi and cargo transport and the main challenges of urban environments. In this line, the ConOps discusses how some actors like U-space Service Providers (USSPs), Common Information Service Providers (CISPs) or Air Navigation Service Providers (ANSPs) will have to take on a series of new and extended (or enhanced) U-space services and responsibilities to be able to manage this higher performing and higher risk air-taxi operations.

Air-taxis and big-cargo eVTOLS, referred to as High Performance Vehicles (HPVs) in AMU-LED’s ConOps, will have to coexist with other smaller UAVs or Standard Performance Vehicles (SPVs) with different flight performances and safety implications and therefore different CNS and DAA requirements. While air-taxis will most likely be equipped with GNSS integrity monitoring receiver, ADS-B or ACAS-Xu and robust 4G/5G or satellite communication datalinks, SPVs will be much more restricted in terms of equipment affordability.

Similarly, during this transitional period, manned traffic will probably not be fully conspicuous yet (most VFR traffic lacks transponders today) and there won’t be a full integration between UTM and ATM either in terms of traffic services for tactical deconfliction. On top of that, altitude references will most likely be still different (geometric vs barometric).

In order to safely cope with this heterogeneous traffic, AMU-LED proposes to temporarily segregate HPVs (air-taxis and big cargo) from both manned aviation and SPVs (small UAS). Expanding on the concept proposed by the FAA (link) and Australia (link), and suggested also by EASA (link), of using corridors to confine air-taxi operations, AMU-LED is opting for a more flexible solution by reserving a whole layer of airspace for air-taxis to fly more efficient routes. This is referred to as the “High Performance Layer” (HPL) and contained within the upper limits of the Very Low Level (VLL), where manned operations are generally restricted, in order to avoid redesigning the existing airspace. In this way, air taxis will temporarily fly above small drones and below manned traffic in a segregated manner. 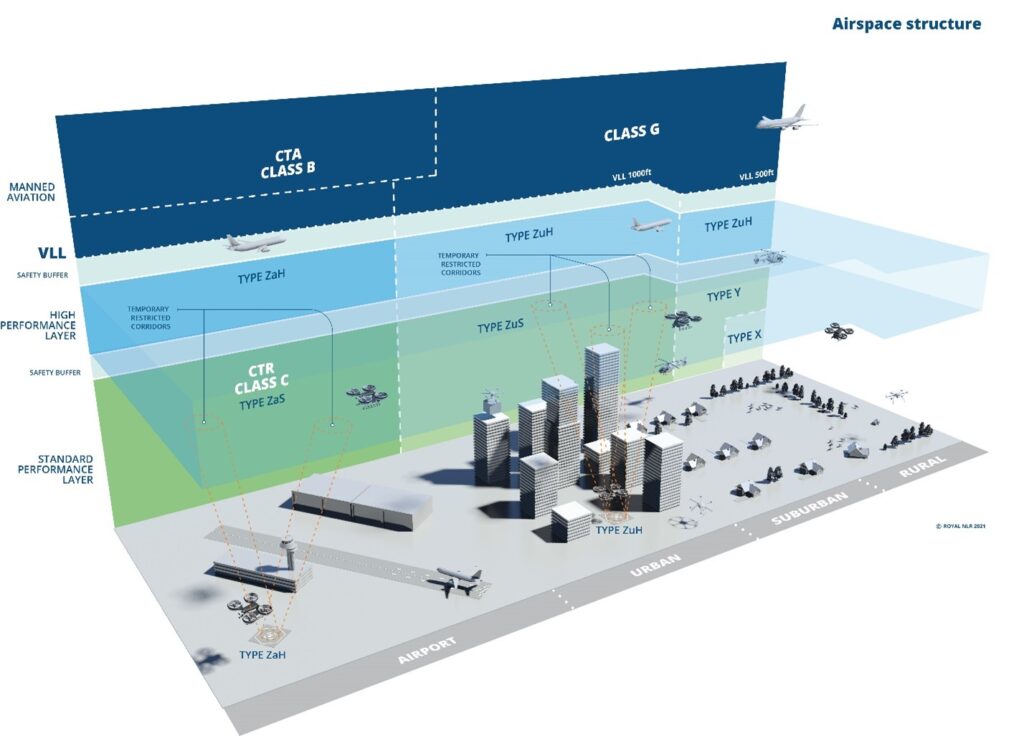 Manned aviation aircraft could also enter this layer provided that they comply with the access rules, follow the procedures and make use of the required U-space services. Otherwise, a dynamic airspace reconfiguration should be requested through ATC to temporarily restrict HPV (and SPV) operations.

This airspace structure doesn’t prevent the promulgation of UAM corridors connecting cities above VLL for larger taxis with higher cruise height, speed and range than those expected for intra-city operations.

Access to vertiports through the Standard Performance Layer will be protected by the use of dynamic corridors, restricting SPV operations just when HPV requires so as not to hold unnecessary airspace. The activation of such corridors will be subordinated to the ANSP in case of U-space within controlled airspace (e.g. airport CTR).

A lot of questions remain open, like what should be the size of the safety buffers between layers and the access requirements for each of them (e.g. CNS, DAA, etc.); who should manage air-taxi operations in controlled and uncontrolled airspace and whether tactical deconfliction services should be advisory (warnings) or flight commands provided by humans (ANSP-like) or automated (USSP-like); or whether Vertiport Operators should provide just resources availability information or be actively involved in the management of the dynamic corridors and provision of clearances. All these and other questions are being discussed with other Very Large Demonstration projects in the framework of the SJU U-Space ConOps Coordination Cell which will conclude with the publication of the 4th version of the European U-Space ConOps.